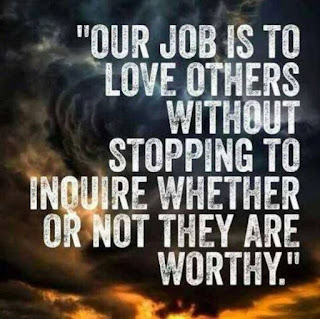 I wasn't always a Christian in the strictest sense of the word.  For the first twenty years of my life I was a devout Mormon.  I'm not going to get into the whole (are Mormons Christians?) thing here.  It's irrelevant to the issue at hand.  Needless to say, the LDS Church and I parted ways when I was in college.

My roommate was an on fire, spread the good news, talking in tongues Christian.  He converted me and I was baptized by winter term.  Man, did I grab the ecclesiastical bull by the horns.  I was thanking God for every flower and blade of grass.  Campus InterVarsity Bible study was conducted each week in my dorm room baby!

Enter the OCC (Oregon Christian Coalition).  They sponsored the, now infamous, ballot measure five.  The measure would have made it legal to fire someone who was suspected of being LGBT and it would have banned tax supported institutions from employing LGBT people as teachers, police officers, fire fighters, or any other type of public servant. Naturally, I began campaigning against the measure.

It wasn't until I was exposed to the liberal UCC that I was comfortable being a Christian again.  My friend, Margy, brought me to Hillsdale Community Church. Pastor Jennifer Garrison Brownell gave a sermon about Muslims not being "the enemy." She held an informal lunch for first time visitors after the service. During the meal of sandwiches and coffee, I learned their's is a liberal Christian church which accepts gays & minorities.  I rejoined Christ's flock that day.

My story had a happy ending.  Yet, I wonder how many people are put off of Christianity upon seeing bad examples being set.  Do they see self appointed spokesman of Christ protesting at the funerals of gay service men and not want to be associated with Christian brand?  Is the Christian label tarnished every time the Bible is quoted to argue against health care for the poor?  When zealots staff "pregnancy crisis centers" posing as abortion clinics, in order to pressure women into a single course of action, does it send ethical seekers of truth running the other way?

It did me.  I'll be honest, for a long time the words "Christian" and "bigot" were synonymous in my mind.  If I hadn't been exposed to positive examples of the faith, I'd still be thinking that way.  We can't can't make the bad examples of the faith shut up, nor should we try.  All we can do is try to set a good example by being kind, generous, trust worthy, and loving.  If we live our lives in the best ways we know how, perhaps we can polish the Christian label into the beacon of truth it should be.
on April 20, 2018 No comments:

-
"For this reason God gave them up to dishonorable passions. For their women exchanged natural relations for those that are contrary to nature; and the men likewise gave up natural relations with women and were consumed with passion for one another, men committing shameless acts with men and receiving in themselves the due penalty for their error.
And since they did not see fit to acknowledge God, God gave them up to a debased mind to do what ought not to be done. " - Romans 1: 26-28 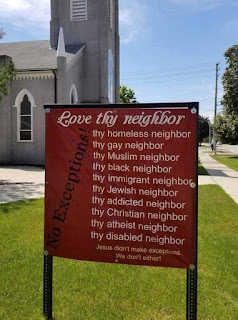 My Bible study began studying Romans this week.  The next day my good friend, L, emailed me and said this book will be a hard one for her to get through.  L is a half of a very healthy, very loving, marriage.  It simply happens to be a marriage between two terrific ladies.

I was irked (I'm keeping it clean).  The fact that the Bible can be construed to put great people down really makes me hot. I don't think Jesus ever concerned himself with the thought of homosexuality in any of the Gospels.  It wasn't an issue that was on his Radar.

Unfortunately, this passage, and similar verses, are used today to justify hatred and cruelty. When Mathew Shepard was tortured for being gay in Laramie, Wyoming, I wonder if the perpetrators were quoting this scripture?

It's all about context people! Paul said they "exchanged natural relations for those that are contrary to nature." "Natural relations" would have been partnerships that resulted in pregnancy. Back then if you didn't have kids there was no one to take care of you in old age. It was foolish to the point of being dangerous to not have kids in those days. We live in a completely different time. Not only do we have social programs for the elderly, but we're over populated to boot.  The wisdom behind chastising those relationships no longer applies.


The Bible is the Holy reflection of God's Word, with much to teach us about mercy, compassion, obedience, charity, faith, cleanliness, and love.  I believe that, I do.  But, it's a living breathing document intended to serve as a guide not a straight jacket.  It's up to us as thinking reasoning Christians to apply its principles to the world in which we live today.

Anyone who reads the Bible and comes away with a message of hate, is missing the point of the book as a whole.
on April 11, 2018 No comments:

-
My James Kiester, and I'm a liberal Christian. Being a Christian, I believe God walked the Earth as Christ to make our redemption possible. 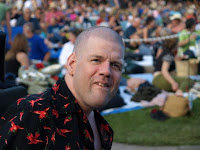 That being said, I'm a progressive thinker and can respect, even be friends with, people of all faiths/beliefs as long as they're kind and down to Earth.

To keep myself centered and in tune with the Holy Spirit I've made a daily habit of reading the Bible and praying.  I'm currently reading the Apocryphal books, which are a collection of Scriptures which didn't make the cut when the canonized Bibles was compiled.  Whether or not they're accepted by mainstream churches, I'm finding they add a kind of perspective to the study of the Bible.

My understanding of Scripture is being further heightened by my participation in a bi-weekly Bible study through the Hillsdale Community Church - United Church of Christ.  Because of certain physical challenges, I find it hard to attend church in person.  Fortunately, Windermere Union Church United Church of Christ puts their sermons online, allowing me to partake of God's word each Sunday.

Jesus was, in my opinion, the original liberal.  He cared about motives than deeds (Matthew 23:5) and more about compassion than adhering to rules (Luke 13:10-17 & Luke 6:1-11).  I already have a food blog and a literature/current events blog, which I maintain on a regular basis.  Yet, I find myself thinking about matters of a spiritual nature more and more these days.  Thus, I intend to use this blog to air those thoughts and feelings.
on April 04, 2018 No comments: