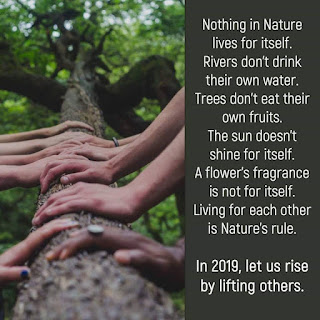 My Bible Study is currently studying Genesis. When we got to chapter 4, the question, “Am I my brother's keeper?” bothered me. Then my friend, Kate Jones, posted the graphic to the left on Facebook, and things just coalesced in my mind.

A saying which I really hate is, “Look out for number one.” While we need to make sure we have a roof over our heads and food on the table, the saying implies we can provide for ourselves at the expense of others.

We ARE one another’s keeper. We’re here to help and nurture each other. In Luke 14:12-14 Jesus said, “When you give a dinner or a banquet, do not invite your friends or your brothers or your relatives or rich neighbors, lest they also invite you in return and you be repaid. But when you give a feast, invite the poor, the crippled, the lame, the blind, and you will be blessed, because they cannot repay you. For you will be repaid at the resurrection of the just.”

Looking out for number one isn't enough. We're here to look out for each other.
on April 19, 2019 No comments:

-
I don’t know how many of you watch boxing,  but each fighter will say a prayer in their corner before the fight.  After the fight the winner will give the credit to God during the post fight interview.  Personally, I don’t believe God is blessing the winner and punishing the loser.

Deep down, many of us have that mind-set though.  When something good happens to us we’re being rewarded for our piety.  When hard times come we're being punished by God for our wicked ways.

Heck, when my health took a turn for the worse, in 2016, I felt like I was being punished.  Of course, I wasn't, but it took A LOT of prayer to shed that feeling.

I was talking to Pastor Buchanan recently, and he explained, “Hebrew theology also believed God was the cause of everything.  If there was a bumper crop, God did it. If there was a famine, God did it to punish. If the Israelites won a battle, it was the right hand of God that won the day.  If they lost a battle, God allowed it to happen as a punishment.”

On a surface level it makes sense.  God is a just God, therefore we must deserve the things that happen to us.  That’s Karma, not the Gospel.  In Matthew 5:45 Jesus said point blank, “For he makes his sun rise on the evil and on the good, and sends rain on the just and on the unjust.”

Think about it.  John The Baptist and Peter were pretty pious men, and they both came to pretty horrific ends.  One had his head cut off, and the other was crucified upside down.

I’m not saying goodness is always punished, or that God isn't in our corner.  I'm simply suggesting that when we go through hard times it's not a reflection of our moral character, nor is it a sign that we’ve been abandoned by God.
-