The Goodness of Man

-
Genesis 6:5 ~ “The Lord saw that the wickedness of man was great in the earth, and that every intention of the thoughts of his heart was only evil continually.” 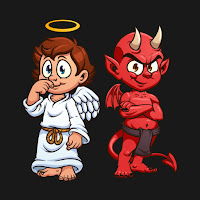 Lately, I've been in a spiritual funk.  Since humans have been able to reason, philosophers and theologians have debated as to whether humans are inherently good or evil.  20 years ago, I would have argued that laws protecting the innocent were proof of humankind's innate goodness.  Recently, that belief has been tested.

While I, personally, have been surrounded by people with good hearts, I see our society plunging into a continual state of depravity & evil.


I’m not known for being a doom and gloom guy; people often thank me for inspiring them with my positive outlook.  While such an outlook is becoming harder to maintain, I have found a single mustard seed of hope to cling to.

I was watching the news, and in between stories of human cruelty and partisan bickering, was the story of Morehouse College’s class of 2019.  During the class’s graduation ceremony, Billionaire Robert Smith announced he would pay off the student loans for every member of the graduating class.

Say what you will about the darkness of the times, there IS still good in the world.  It's easy forget, but there are still good people who believe in, and practice kindness, compassion, and charity.  God is still speaking through the hands and deeds of good people.
on May 23, 2019 No comments:

Romantics and poets have often identified, “I love you,” as the three greatest words in the English language.  I take no issue with this claim; surely they're not uttered nearly enough.  Yet, I find it curious that people rarely, if ever, discuss the most harmful three word phrase in the English language, “not my problem.”

A driver is broken down along the shoulder of the freeway, and we zoom on by.  Not my problem.

The teen next door walks slumped from his house, obviously depressed.  We wave and go about our business.  Not my problem.

A week later, that teen took a rifle to a school, or a mall, or a place of worship and multiple innocents end up dead.

Last weekend, many Americans watched with a feeling of helplessness as, now nine fingered, Rabbi Goldstein mourned the loss of his friend and parishioner, Lori Gilbert Kaye at the hands of a hate filled 19 year old who attacked Goldstein’s synagogue on the l day of Passover.

I know nothing about the teenage attacker, not even his name.  Nevertheless, I’d bet good money he wasn’t born wanting to kill Jews.  Something happened to confuse and/or depress this young man, and when nobody acknowledged the warning signs, because it wasn’t their problem, he latched on to hate.

None of us can fix the world’s problems single handedly.  Yet, if we each pay attention, and pause long enough to care, we can improve our own little corner of the world.  If everyone cared enough to improve their own microcosm, then hate and killing would be a rarity rather than the norm.
on May 02, 2019 No comments: