-
"But he, desiring to justify himself, said to Jesus, “And who is my neighbor?”  Jesus replied, “A man was going down from Jerusalem to Jericho, and he fell among robbers, who stripped him and beat him and departed, leaving him half dead.  Now by chance a priest was going down that road, and when he saw him he passed by on the other side.  So likewise a Levite, when he came to the place and saw him, passed by on the other side.  But a Samaritan, as he journeyed, came to where he was, and when he saw him, he had compassion.  He went to him and bound up his wounds, pouring on oil and wine. Then he set him on his own animal and brought him to an inn and took care of him. And the next day he took out two denarii and gave them to the innkeeper, saying, ‘Take care of him, and whatever more you spend, I will repay you when I come back.’" ~Luke 10:29-35 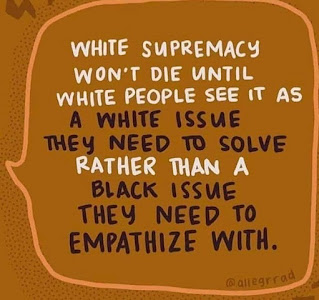 I'm a racist.  Don't misunderstand, I don't hate people of color, nor do I believe in segregation.  However, I do benefit from white privilege.  My home is built on land which  Native Americans hunted on before white soldiers claimed the land on behalf of a white government.  As wrong as the theft was, I'm not willing to give the land back to its original users/owners.
Likewise, our country was built, in large part, by slave labor.  According to a May 5th, 2019 article in The New York Times, the value of the labor stolen from slaves was estimated to be in the neighborhood of 500 million dollars in 1969.  I can't even fathom what the debt would be in today's dollars.
Without getting to political, my point is, none of us have the ability to erase the sins of the past.  Yet, we need not be shackled by the original sins of our  predecessors.  We can pave a kinder nobler future for our inheritors.  To that end, we must take a lesson from the Good Samaritan, and treat everyone as being our neighbor.
on August 05, 2020 No comments: