God Is In My Corner

-
"Now when Joshua was near Jericho, he looked up and saw a man standing in front of him with a drawn sword in his hand. Joshua went up to him and asked, 'Are you for us or for our enemies?' 'Neither,' he replied, 'but as commander of the army of the LORD I have now come.' Then Joshua fell facedown to the ground in reverence, and asked him, 'What message does my Lord have for his servant?'” ~ Joshua 5:13-14 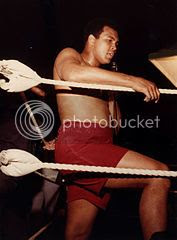 Title: Muhammad Ali during a Boxing Match in Washington | This image was taken from Flickr's The Commons. The uploading organization may have various reasons for determining that no known copyright restrictions exist.

Have you ever watched a professional boxing match?  Before the fighters are introduced, each boxer will kneel in their corner and pray for victory.  Of course, there can only be one winner.  I often wonder if the defeated pugilist feels abandoned by God?

Praying for victory isn't unique to boxing.  Soldiers pray in the trenches during times of war.  Both armies genuinely believe God is on their side.  But, soldiers on both sides are killed.  Then, either the war drags on indefinitely, or one side eventually triumphs.  Does that mean the defeated populace has been abandoned by God?

In roughly six weeks, Americans will select a new President.  People on both sides of this bitterly contested race are praying that their candidate will be sworn into office in January.  Does that mean God is a few weeks away from abandoning America's conservatives or liberals?

I don't think so.   God doesn't take sides in the contests we, as mortals, assign supreme importance to.  Personally, I can't picture God fixing the results of a sporting event, election, or war.

According to Romans 2:6-11 God does not show favoritism. "He will render to each one according to his works: to those who by patience in well-doing seek for glory and honor and immortality, he will give eternal life; but for those who are self-seeking and do not obey the truth, but obey unrighteousness, there will be wrath and fury. There will be tribulation and distress for every human being who does evil, the Jew first and also the Greek, but glory and honor and peace for everyone who does good, the Jew first and also the Greek. For God shows no partiality."

OK, I think He steered, NAZI sympathizer, King Edward VIII toward, American divorcee, Wallis Simpson, so he'd abdicate the throne before WWII.  For the most part though, He doesn't take sides.  God is rooting for each one us to grow into the best people we can become.

No matter which  political ideologically and/or flag we fight for, God wants us to fight honestly and nobly with compassionate regard for the welfare of others.  God is in the corner of each one of us, serving as our cutman between metaphorical rounds, so we can continue to fight the good fight, the fight for personal growth.