Heaven May Be What We Make It

-
I just finished watching the memorial service for Senator John McCain.  He was truly a unifying force in a time of divisiveness.  As I watched men from across the political spectrum pay homage to the Senator, I couldn't help but think about the afterlife. 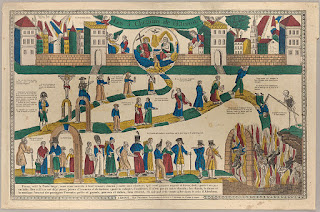 Subject: The 3 Roads to Eternity | Date: 1825 | Artist: Georgin François |This work is in the public domain in its country of origin and other countries and areas where the copyright term is the author's life plus 70 years or less.


A few weeks ago my pastor gave a sermon on our conception of Heaven and Hell. Apparently the Judeo Christian tradition didn't have a concept of Heaven and Hell until it adopted the idea from Zoroastrianism.  I won't regurgitate his entire lesson regarding the kingdom of God being here, on Earth, rather than some heavenly realm.

I grew up Mormon, and the LDS Church has the afterlife pretty much mapped out.  They have things divided into kingdoms with different tiers for each kingdom.  It felt great knowing that if I remained a faithful Mormon that I could earn my way to the Celestial Kingdom (the highest level of Heaven).  It was a secure feeling to KNOW what was waiting for me on the other side.

Of course when I left the church I left that map behind.  Yet, there was still the feeling that no matter how much I suffered in this life, I had Heaven to look forward to.  I didn't want to let go of that perceived promise.  The idea of being able to earn a place in Heaven, and avoid a trip to Hell, by asking Jesus into my heart and living a good life was as much a part of my psyche as my identity as a man and my political affiliation.

Being a computer nerd, I looked it up online.  Sure enough, captive Jews most likely picked up the concept from their Persian captors in Babylonia.  When they were liberated in 539 BCE they took the idea back to Jerusalem where it was integrated into Judaism.

If this is so, and Jesus was teaching people how to live as a complete person while on Earth, I was forced to wonder how this information would change my outlook.  I still believe in an afterlife.  I believe that a spirit, such as McCain's, simply doesn't cease to exist.  Heck, I believe I'll always exist in some form.  Perhaps, the only thing I need to let go of is the idea that we can understand the structure of the afterlife.

I DO believe that we will take our memories and feelings with us.  If that's the case, then maybe "Heaven" is simply eternity with a clear conscience.  On the flip side, perhaps "Hell" is having to spend eternity under the weight of our own guilt.  I have no idea if I'm right, but for now I think it's a healthy way to think of life after death.
on August 30, 2018 No comments:

-
Those who know me know I'm a comic book nut.  I always have been.  When you grow up unable to walk, reading about characters who can do anything provides a kind of balance.  In any event, I grew up between the pages of Superman, Batman, and alike.

Someone told me that X-Men was a great title to collect.  I picked up that year's annual, which is typically a good jumping in point for a comic book.  This issue featured a story about an X-Man drowning his sorrows in a bar, and a story about a mobbed up version of the Hulk shaking down gamblers.  I was not impressed, and didn't pick up another X-Men book for twenty years.  As a result, I missed out on some of the best comic book stories ever written.

I have a friend who is missing out on a relationship with God for much the same reason.  She's known, seemingly devout, Christians who have called her a bad parent and evil for being a single parent.  Now she sees Christians, as a whole, as judgmental hypocrites.  I keep telling her that many of us aren't like that, but that initial negative encounter has her convinced that good Christians are the exception rather than the rule.

It occurs to me that Christians are more than merely followers of Jesus Christ.  We're ambassadors people.  Like it or lump it, we set the example.  Non-Christians who have their noses pressed against the proverbial glass will see us first.  If they don't like what they see, they won't stick around long enough to examine the Bible or church doctrine.  They'll take their spiritual needs to the agnostics down the street.

It's not fair, but our actions and attitudes do effect others.  I don't know if we'll be held accountable for turning people off who may have otherwise come to know God, but I know I don't want to risk it.  I don't want to have to meet God on Judgement Day and answer for my neighbor not having a personal relationship with God.

-
"The only way to get rid of temptation is to yield to it.” ~ Oscar Wilde, The Picture of Dorian Gray 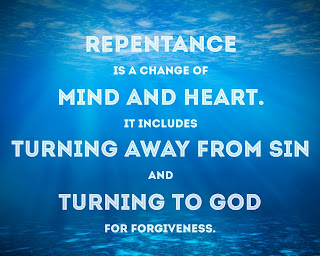 With tongue in cheek, I've cited this quotation multiple times in my life. It usually comes up just as I'm about to do something which I know I shouldn't do. I say the line, give a chuckle, and commit the sin in question. Besides I'm a Christian, God will forgive me.

Er, it's a bad attitude, but an easy trap to fall into. It is. Left to my own devices, I can use what I know to justify almost anything. I figure if I'm not hurting anyone I can look at that picture or hang in that chat room. No harm no foul, right?

The problem is that deep down I know I'm doing something contrary to the will of God. When I commit the same sin over and over again, asking for forgiveness each time, repentance becomes a lie. It becomes harder to pray. When that happens, the sin becomes a wedge between me and God.

I'm not sure where exactly I thought I was going with this blog. I do know that I will probably always struggle with temptation. Perhaps the trick is to focus on other things and replace sinful habits with constructive pursuits. Easier said than done, I know, but I think it's worth the effort. There is no worse feeling than being ashamed to pray.
on August 08, 2018 No comments: