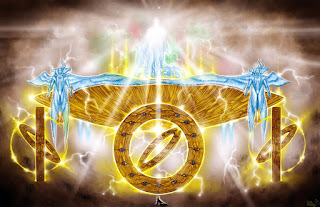 “I looked, and I saw a windstorm coming out of the north—an immense cloud with flashing lightning and surrounded by brilliant light. The center of the fire looked like glowing metal, and in the fire was what looked like four living creatures. In appearance their form was human, but each of them had four faces and four wings. Their legs were straight; their feet were like those of a calf and gleamed like burnished bronze. Under their wings on their four sides they had human hands . All four of them had faces and wings, and the wings of one touched the wings of another. Each one went straight ahead; they did not turn as they moved. Their faces looked like this: Each of the four had the face of a human being, and on the right side each had the face of a lion, and on the left the face of an ox; each also had the face of an eagle.” ~ Ezekiel 1:4-10

The History Channel airs a weekly program dedicated to the exploration of the theory that mankind was shepherded by beings from another world thousands of years ago. Learned men, dressed in tweed jackets and turtle necks, point to pyramid drawings of supposed astronauts and ancient models of our solar system as proof of such visitations.

One piece of evidence these “scholars” cite is the above passage from Ezekiel. According to them, the wheel and cloud was a spaceship and its occupants were mistaken for angels by early man.

I thought about this, and a question came to mind. Why is it more educated to believe in aliens rather than angels, galactic travelers rather than God?

Don’t misunderstand, I don't think we’re alone in the Universe. John 10:16 refers to, “Other sheep I have, which are not of this fold…,” which could, conceivably, refer to life on other worlds. I simply don’t understand why it’s seen as open minded to believe in the possibility of extraterrestrial life, but viewed as superstitious to believe in God.

Surely if there is life out there, it too had to be created by something. I have to believe an all-powerful God is capable of creating more than one world.

In any event, I have no trouble believing that angels are angels.
on February 20, 2020 No comments: