No Time For Hate 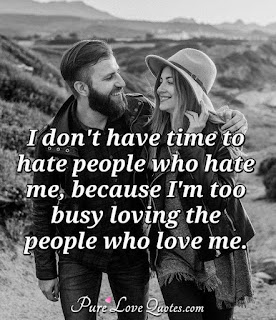 My nurse was giving me a shower the other day when she bumped head on the soap caddie.  It smarted, but there was no blood or goose egg or anything.  Yet, as soon as cranium hit fixture she exclaimed, "I hate that thing!"  The target of her loathing was an inanimate object, so no feelings were hurt.  It struck me that we use the word as easily as we clear our throats.
HATE [heyt]
verb (used with object), hat·ed, hat·ing.
to dislike intensely or passionately; feel extreme aversion for or extreme hostility toward; detest:to hate the enemy; to hate bigotry.
It's a powerful word.  It's more than simply not caring for the target.  It's disliking with a passion, a venom.  Personally, I've never hated and been happy at the same time.  Joyous feelings have  always been pushed out by feelings of anger, bitterness, and sadness.
I'm a political junkie, and when certain politicians come on the news, I've been known to tell the room, "I hate that *#$&%!"  While I was weighed down by bitter feelings, the politician in question was oblivious to my self-inflicted emotional suffering.
As negative as hate is, it seems to be everywhere these days.  People belonging to racial minorities hate the police.  Pockets of white America hate people belonging to racial minorities.  Hard nosed Christians hate gays & lesbians.  Our political leaders hate each other so much they won't sign bills sponsored by the opposing political party.
Hate is pointless.
It's counterproductive.
It's destructive.
Hate requires time and energy.  The time and energy we dedicate to hate is time and energy we're not spending on something fun and/or productive, and the hater is the one who loses out the most.  Lets axe it from our schedules and our lives.
on June 11, 2021